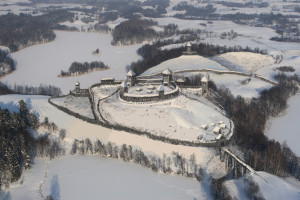 The term stronghold of Yatvingia refers to the relics of Early Medieval stronghold units located between the line of Great Masurian Lakes on the west, and the mid course of the Neman River to the east, as well as between the mid course of the Szeszupa River on the north, and the Biebrza and the Supraśl rivers’ basin in the south. The chronological framework of this paper is determined – on one side – with the moment of the appearance of new settlement forms, i.e. strongholds in the cultural landscape of these areas at about the middle of the 9th century, and on the other with the abandonment of the strongholds at the turn of the 13th to the 14th century. In the authors’ opinion, the stronghold’s unit was created not only by the stronghold itself, which is the most visible element in archaeological landscape nowadays, but also by accompanying fortified settlements, small strongholds and watchtowers, dykes, ramparts and ditches of different kinds, as well as strengthened gate passages as well as wooden obstacles, and other defensive elements. These defensive complexes were connected with a networks of roads, together with satellite settlements and sites of economic activity they created a consistent settlement organism.

During many years of studies and surveys conducted by the Balt Archaeology Department of the State Archaeological Museum, there were dozens of stronghold’s units selected that met the above mentioned criteria; this number is still growing. The results of research done so far make it possible to work out a research strategy for the Early Medieval stronghold’s units of Yotvingia. It consists of a variety of activities, involving both traditional archaeology, as well as modern, non-invasive methods of prospection, analysis, and research involving other scientific disciplines. This strategy involves the following activities: archival query, preliminary surface reconnaisance, aerial laser scanning ALS/LiDAR including the use of vertical and slant aerial photographs, consultations with geologists and geomorphologists, geophysical examinations, systematic fieldwalking with the use of precise, 3D location of finds and features, test excavations, environmental analyses, palynological examinations, underwater researches and historical sources’ analysis concerning stronghold complexes. The information collected during this process is then gathered in a database. Conducted with the use of modern tools – such as Geographical Information System (GIS) – the multi-aspect analysis of stronghold’s units makes it possible to propose a detailed reconstruction of the settlement processes in Yatvingia in Early Middle Ages. This reconstruction allows us to observe the rise, the development, and the fall of sometimes multi-element stronghold complexes.